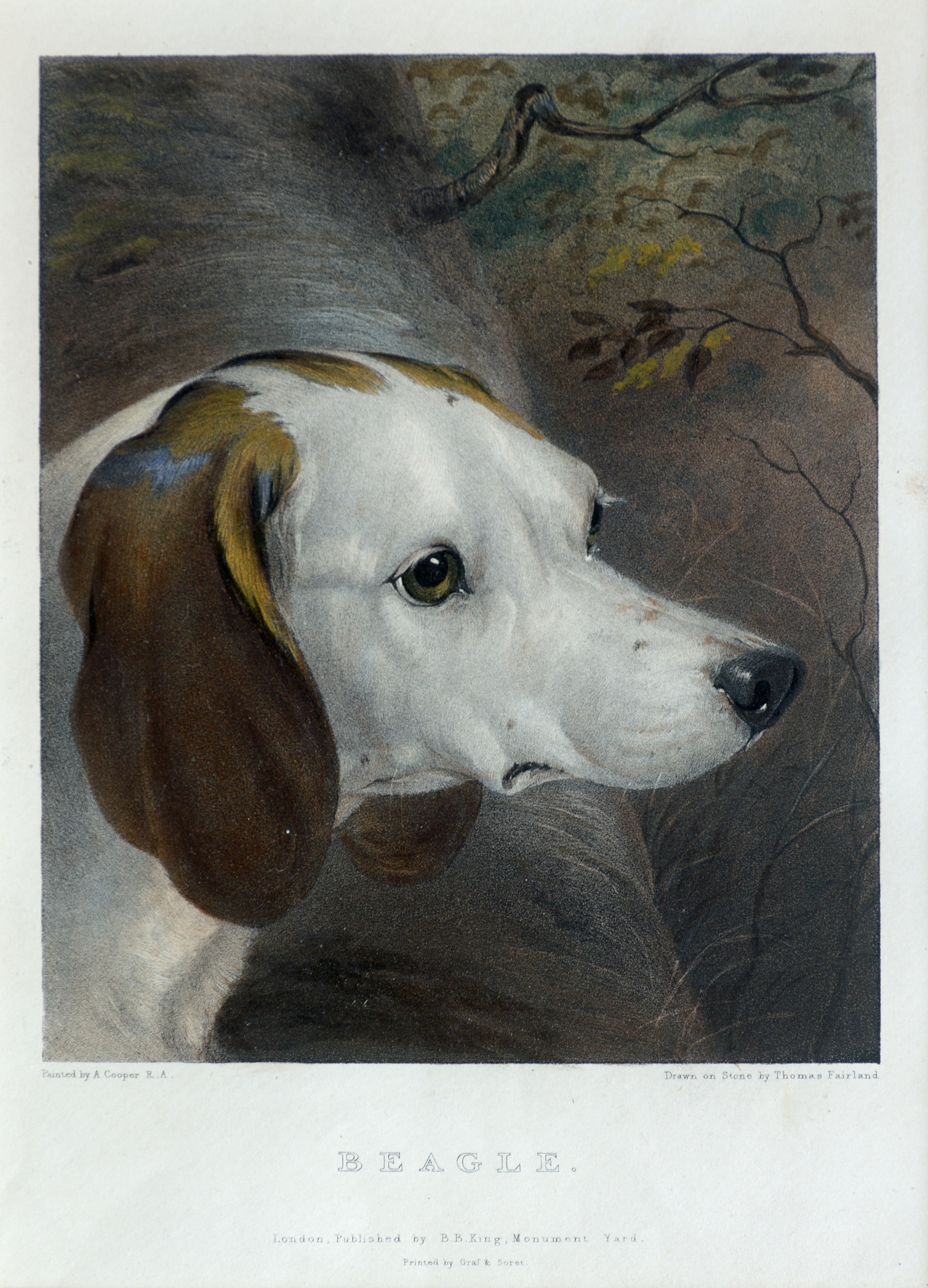 The National Horseracing Museum’s newest exhibition is now open! ‘Follow your nose! A History of Beagling’ focuses on the pastime of hunting hares and rabbits with packs of Beagles or Basset hounds.
Both Beagles and Basset Hounds trace their ancestry in Britain back to the Norman Conquest in 1066. The name ‘Basset’ is derived from the French word ‘bas’, meaning 'low’. The Beagle is one of the smallest hunting hounds and the word ‘beagle’ may derive from the Gaelic word ‘beag’, meaning ‘small’. Both types of hounds hunt by scent and are slow enough to be followed on foot. In the past, any pack of small-sized hounds, were called Beagles regardless of their breeding.
The name ‘Beagle’ appears in the sixteenth century in the household books of King Henry VIII. His daughter Queen Elizabeth I was also said to be an enthusiastic follower. Royal support for beagling continued into the 19th century and may have helped ensure its survival. Queen Victoria kept a pack of Beagles and Prince Albert a pack of Harriers. However, the increase in popularity of hunting on horseback with Foxhounds meant that by 1875 there were only about ten packs of Beagles left in the UK. Beagling enthusiasts kept the tradition alive by breeding a Beagle with broader appeal, which was recognized by the Kennel Club in 1890. Beagle and Basset Hound packs are still kept today, but now follow artificial scent trails instead of pursuing wildlife.
The exhibition also touches on Beagles and Basset Hounds in popular culture. Guy, a Beagle adopted from a rescue centre by Megan Markle, is the subject of a children’s book and Snoopy is perhaps the best-known Beagle in the world. Snoopy’s creator, Charles M. Schulz said that ‘Snoopy didn't start off being a Beagle. It's just that 'beagle' is a funny word!’
Museum Assistant, Alana Edgeworth’s favourite piece in the exhibition is ‘Dwarf Beagles.’ She says ‘It’s so interesting to find out about the history of beagling, particularly about early breed types. In the 17th century small Beagles were bred so they could be easily carried by their owners!’
Packard Curator, Dr Alexandra Fletcher also has a favourite piece, a print by Thomas Fairland of a painting by Abraham Cooper. She says ‘I love this portrait of a Beagle because it shows how much the breed has changed in the last 200 years or so. Cooper has captured the Beagle’s soulful expression but you can also see that in the past the breed had a much longer, thinner face than the Beagles of today.’
The exhibition is open now until 19th April 2022 and is included in the NHRM ticket admission price.

Tweets by @BSATrust
Copyright © 2022 BSAT, All rights reserved
This website uses cookies and similar technologies to give you the very best user experience, including to personalise advertising and content. By clicking 'Accept', you accept all cookies.
I accept
Accessibility