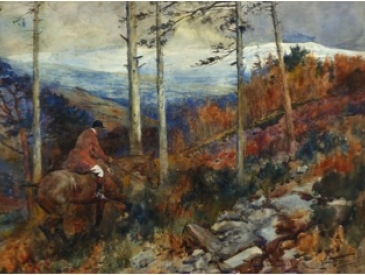 The British Sporting Art Trust (BSAT) presents Lionel Edwards (1878-1966): Seen from the Saddle  This is the first major exhibition of his work since 1986 and opens on the 55th anniversary of his death. The pictures are loaned from private collections and include many works not previously exhibited or published.

The artist’s 87 years spanned from the reign of Queen Victoria to the new Elizabethan Age. He witnessed enormous changes in society: the end of travel by horse-drawn coach, the development of mechanised warfare and farming, the crisscrossing of the landscape with barbed wire and the impact of industrialisation and urban expansion of towns and cities had on the natural environment and people’s enjoyment of it.

Lionel Edwards’ art and writing provides an historical record of our national landscape and those who lived, worked and played in it. Underlying his work is an empathy and understanding of history and its importance for our national identity. He was aware he was witness to a disappearing way of life and has preserved it for posterity.

The exhibited pictures span his entire career and show the full breadth of his expertise in subjects related to the horse, the countryside and historical subjects. Early illustrations for periodicals like Country Life, The Sphere and The Graphic were the foundations on which he built his reputation and ensured his livelihood when commissions were scarce in the First and Second World Wars. His vivid imagination furnished work for dozens of books and his illustrations for children’s books such as Black Beauty, the Maltese Cat and Moorland Mousie were hugely popular.

Gerald Davies of Country Life said that Edwards: “does not show you a picture: he shows you this very England, all stretched out before you – seen between the ears of a galloping horse.” This perfectly describes the hunting subjects included in the exhibition, which show the rich variety of British landscapes hunted by the Exmoor, the Devon and Somerset, the Quorn, the Morpeth and the Flint and Denbigh. His ability to capture horses and hounds at full chase in a perfectly rendered landscape under constantly changing winter skies cemented his popularity and reputation.

The artist’s expansive vision and accuracy of detail made him a favoured choice for military regiments and the exhibition includes a number of these major commissions. They show British regiments on active duty engaged in cavalry charges during the First World War, ceremonial duties on Horse Guards Parade and enjoying competitive sporting pursuits like polo. Lionel Edwards served at the Romsey Remount Depot during the First World War, preparing horses for service at the front.

Tweets by @BSATrust
Copyright © 2021 BSAT, All rights reserved
This website uses cookies and similar technologies to give you the very best user experience, including to personalise advertising and content. By clicking 'Accept', you accept all cookies.
I accept
Accessibility