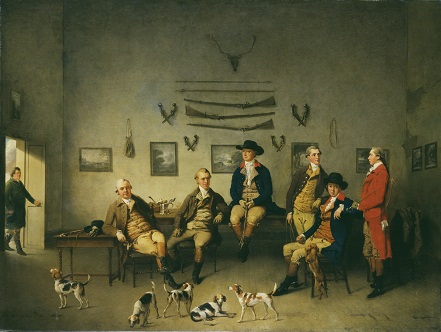 Philip Reinagle (1749 - 1833), whose father was a musician of Hungarian extraction, was born in Scotland
and, at the age of fourteen, became the pupil of Allan Ramsay, the Scottish portrait painter then resident in
London. After serving his apprenticeship Reinagle was admitted to the Royal Academy Schools in 1769,
and later, having proved himself an able copyist, assisted Ramsay in several of his numerous portraits of
King George III and Queen Charlotte. His landscape paintings were influenced by the Dutch artists
Ruysdael, Hobbema, and Wouvermans, who were particularly popular in England at that time. Reinagle's
first accepted work to be hung at the recently formed Royal Academy was in 1773 followed, until 1885, mostly
by other portrait studies. Thereafter, his love of the countryside led him increasingly to concentrate upon
painting images of dogs, cattle and birds plus at the same time making his name as an artist of lively hunting
and shooting scenes. He remained a prolific exhibitor at the Royal Academy (114 works), becoming an
Associate in 1787 and was elected a full Member in 1812.

Reinagle is perhaps best known today for his commissions received from the renowned Colonel Thornton,
one of the most dedicated and flamboyant sportsmen of the late 18th century, from whom he received orders
for several shooting, hunting and hawking works. The best know image of the Colonel was his full-size portrait
of the sportsman holding his 12 barrelled shotgun whilst out roebuck shooting in the forest of Glenmore.
This striking image was painted in collaboration with Sawrey Gilpin - Reinagle producing the large portrait
with Gilpin the landscape and dog. His rivalry with Gilpin was to continue for more than twenty years, and his
picture of "Breaking Cover, Colonel Thornton with his hounds" was ordered as a pendant to Gilpin's large
"Death of a Fox".

Prior to that period in his career, however, from 1780 for a year or two Reinagle would visit Norwich where he
obviously came across the work of Henry Walton (1746 - 1813), a portraitist best known for his group portrait
pictures or conversation pieces as they are regularly described. It was at this point that he painted one of his
most enduringly popular and successful larger pictures. Entitled “Members of the Carrow Abbey Hunt of 1780”
this splendid conversation-piece demonstrates that as a young artist he was not only a very accomplished
portrait painter able to place his sitters in relaxed and comfortable postures, but also one who was to make
his name in years to come as an important sporting and animal painter.

There was a growing trend at the end of the 1700s to hang sporting paintings in rooms directly associated
with sport or leisure: special function rooms from which hunting parties set out, and rooms which also served
to house the hunt breakfasts and suppers, often so riotously depicted in the watercolours of Thomas
Rowlandson. Apart from “Members of the Carrow Abbey Hunt of 1780” there are not many other images
of this type in which we can see so much. The names of all the figures are known, from that of the
huntsman James Mead coming in through the door, to that of John Morse in the blue coat seated in the centre,
a brewer and twice mayor of Norwich who presumably commissioned the work. The other sitters were Timothy
Tompson, the son of a brewer; Robert Harvey, a banker and also Mayor of Norwich; Jeremiah Ives, twice also the mayor;
Jeremiah Tompson and John South Morse. Framed prints are depicted on the walls – probably the
countryside around Carrow Abbey. An assorted array of pistols, guns and spears hang upon the wall to
represent the sportsman’s pursuits, whilst the hounds in the foreground show the pursuit of the deer, fox
and hare around St Faith’s and Spixworth to the north of Norwich and in Bixley, Arminghall and Brook district to the south.

The entry for this picture on the website of Tate Britain from whom this painting has been loaned, says,
“the scene shows the members of a Norfolk hunt and seems to exemplify the whole ethos of English sporting
life in the 18th century. A somewhat austere portrayal of a respectable and healthy group of gentlemen about to
embark on their morning exercise. In this it is in contrast to the more critical images of sportsmen found in
literature of the period, which satirised them for their boorish behaviour”. 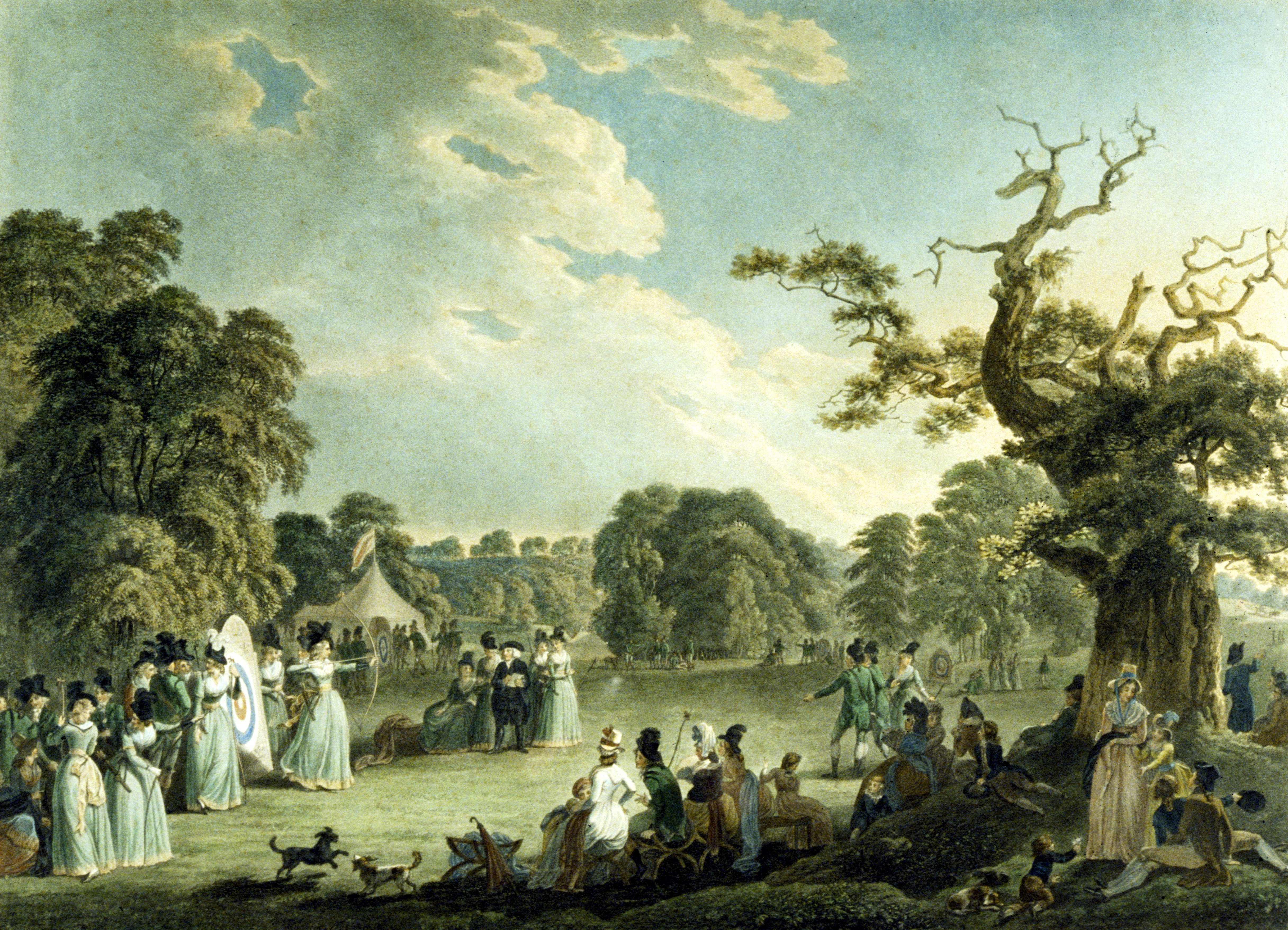 Despite its title this print shows an archery meeting of the Royal British Bowman in 1789. The Society of British Bowmen
were established on February 27th 1787. The original members being made up of 37 ladies and 37 men. The women
competed with smaller bows to the men and in consequence fired a shorter distance.

Meetings were very much social occasions and were subject to strict rules and regulations. Membership was by ballot
and prospective members could be black balled.Six black balls and the membership would be refused. Ladies on
marriage had to gain written consent of their husband to continue with their membership

The society practiced weekly but competed once a fortnight at member’s houses on rotation. Refreshment were strictly
regulated “A collation is ferved under the Society's tent, a limitation is made as to the number of difhes; and the difplay
of any thing hot is punifhed by a fine of live guineas.” 1

Servants were not allow to spectate unless specifically invited by a member. 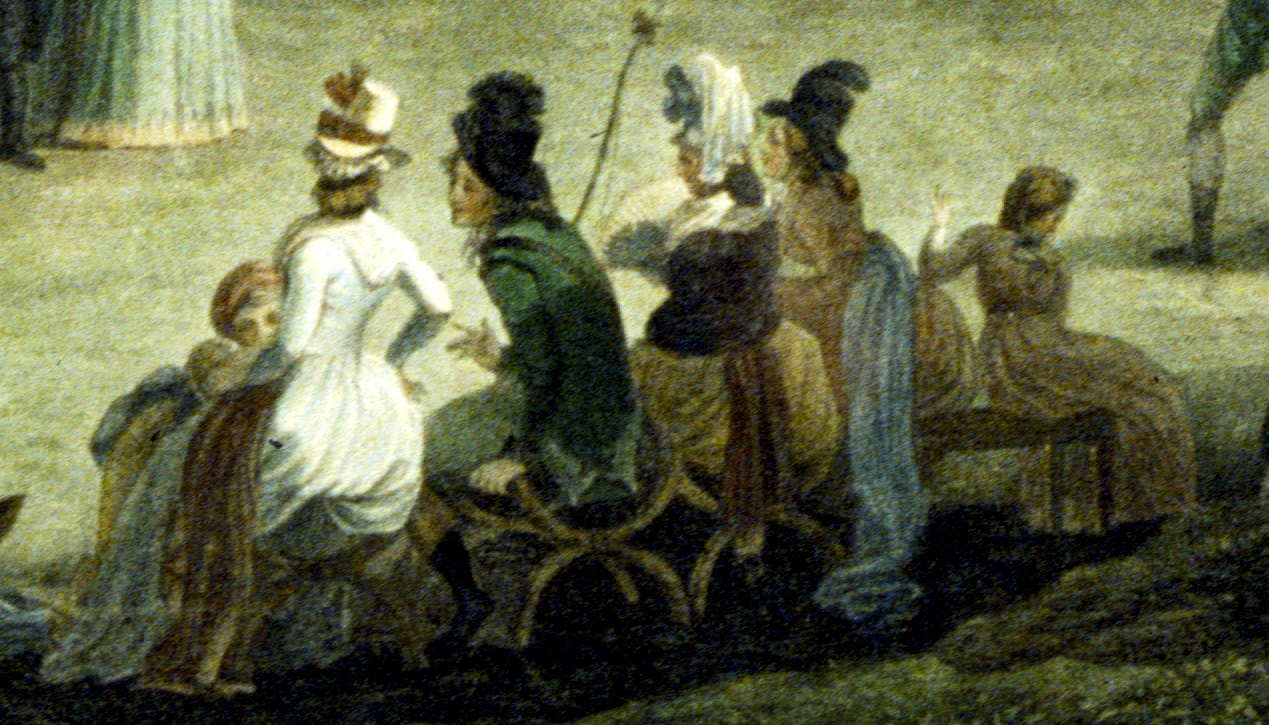 The figures were drawn by John Smirke, with Emes drawing the landscape. According to Walrond, Sir Foster Cunliffe,
a prominent member, recounts in the minutes of the Royal Bowman the artist sketching the drawing on June 12 1789.
The original drawing being in the British Museum collection. He goes on to say,

“the figures are especially said not to be portraits, the lady patroness is shown leaning against the target and can be
recognised by her hat being adorned with white feather….. The lady who won the Captain's Medal at the first meeting
of the year (which was obtained by the first hit in the gold) became lady patroness, and was presented by the society
with a hat and white feathers"2 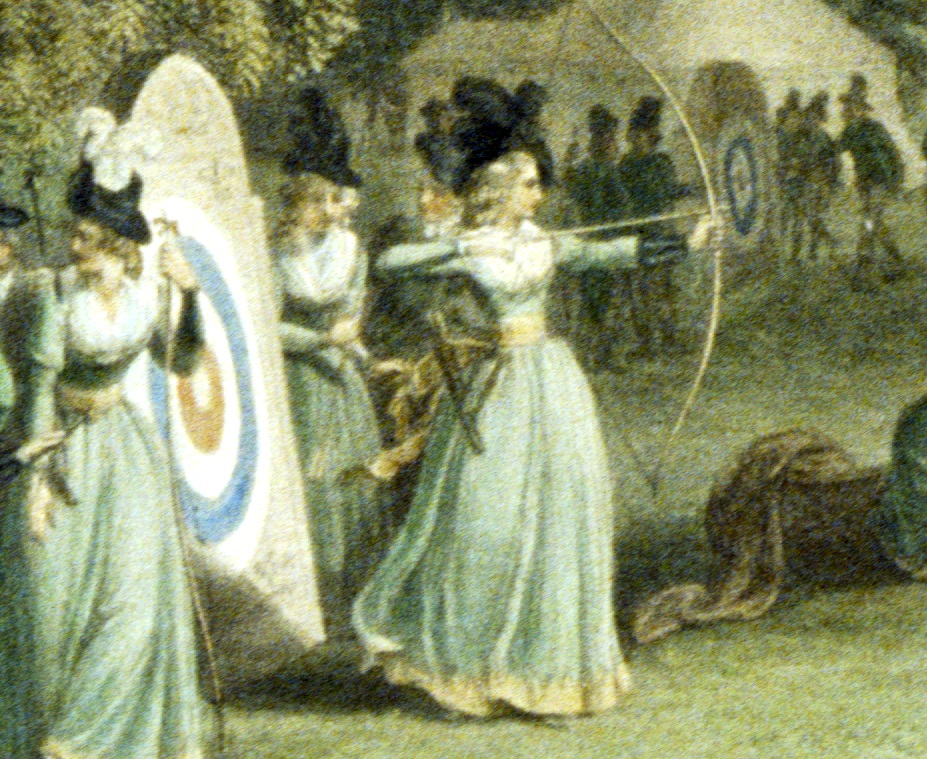 The society was patronised by George Prince of Wales. He gave a medal each year to the gentlemen and ladies.
The Society thrived into the 1860’s with Princess Victoria becoming a member, but by 1870 fashion had changed
and tennis became more popular. The society met for the last time in 1880.

1.  From Anecdotes of Archery
From the earliest ages to the year 1791 by E. Hargrove
2.The Badminton Library Archery by CJ Longman and Walrond

Copyright © 2021 BSAT, All rights reserved
This website uses cookies and similar technologies to give you the very best user experience, including to personalise advertising and content. By clicking 'Accept', you accept all cookies.
I accept
Accessibility